By Jerrod RuhlDecember 2, 2014No Comments 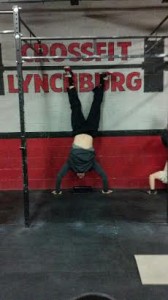 Hometown: Lynchburg, VA via New Jersey, New York, Nebraska, and Maine
Age: 32
When did you first start training at CrossFit Lynchburg?
February 2014
Tell us about your sports & fitness background:
I played high school baseball and basketball. It wasn’t until after college that I became pretty serious about fitness, primarily weight training.
How did you first get exposed to CrossFit?
A long-time CFL member, Adam Barnes, wouldn’t leave me alone about trying CrossFit.  Not only did he talk about the CrossFit programming, but there was always mention of this great community of people.  I finally gave it a shot after I found myself losing interest and motivation in the same old gym routine.  It wasn’t until I finally started CrossFit that I understood the community aspect.
What was your first workout and how did it go?
I’ll never forget it.  Seven straight minutes of burpees.  It was horrible.
Favorite Workout/Least Favorite Workout:
I love anything with a strict movement (e.g. strict pullups, strict hand stand pushups, etc.).  I hate running.
What sort of changes have you seen in your body, health and fitness since starting Crossfit?
In my “gym rat” days, I went through a period of at least 4 years when I was in the gym 6-7 days per week.  I always seemed to be dealing with a nagging back injury which started after I began weight training.  I was strong, but the truth was that I wasn’t as completely fit as I thought I was.  Since beginning CrossFit in February of 2014, I’ve lost at least 10 pounds and am stronger, leaner, and more fit than I’ve ever been.  If there was anything I did in my gym days, it was bench press.  I normally benched twice a week.  During my first several months at CFL we were on cycles that did not include any bench or floor press at all.  There was no doubt in my mind that when we did start a bench/floor press cycle I would be somewhat starting over due to the time off I had taken. Well, the first time I got on the bench at CFL, I set a new personal record that I never thought I would reach….and that was just the beginning.  I would have never attempted Olympic lifts prior to CrossFit for fear of re-aggravating my back injury. Since starting CrossFit and working diligently on my mobility and form, my back is a non-issue and has literally never been better. The list goes on….
What sort of unexpected changes in your life have you experienced out of taking on something like CrossFit?
I unexpectedly don’t dread getting up at 5am to get to CrossFit! Instead, I look forward to it and hate to miss it.  I think with anything you are committed to and disciplined about, and especially something that improves the way you feel physically and psychologically, it naturally bleeds into other parts of your life. Physically, I have more energy and feel great.  Psychologically, I feel more confident and motivated.
Please share any of your favorite CrossFit/CrossFit Lynchburg moments:
Competing in the Brickhouse CrossFit Classic.  It wasn’t pretty, but it was fun.  Also, that first muscle up.  Finally, I love being there when people hit new PRs.

Any advice for people just getting started or new to CrossFit?
You’ve heard this before. I think a person new to CrossFit or any fitness for that matter in a group setting is fearful of what they don’t know, what they think they can’t do, or what they think others may think or see.  What you will find in CrossFit is a great group of like-minded people all at different levels of fitness working toward their own personal goals and encouraging one another along the way. I have found more egos in the weight room than I’ve ever seen in a CrossFit gym.  Be diligent and stay focused and you won’t be able to help but see results.